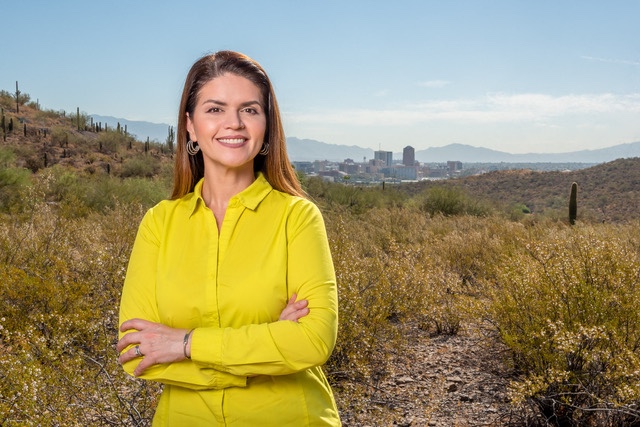 By Francisco Romero .- As the youngest of six children, Regina Romero was born to immigrant parents in the small town of Somerton, Arizona; she was the first member of her family to vote and to graduate from college.

Romero keeps on collecting firsts as she became the first woman elected as Mayor of the City of Tucson and the first Mexican-American Mayor since 1875 in the Old Pueblo.

“It is very important to me, to be an example to young women who want to participate in the political arena,” Romero told VivaPhoenix.com.  “Not only as women or Mexican-Americans, but as citizens of this country we have the ability and the right to do so and do it well.”

After twelve years as a Council Member in Tucson’s West Side Ward 1 Mayor Romero not only gained experience, but knowledge, attitude and commitment to the well-being of her community.

Even at her young age (45) Mayor Romero has been well groomed to take on the responsibilities of running a city.

“Our residents have taken notice of what we did and accomplish in Ward 1 over the past 12 years,” mentioned, the newly elected Mayor.  “Now it’s time to get to work on the many issues our city and our residents need,” added Romero.

On her priority list Mayor Romero mentioned the following:• Great quality of life for Tucson residents• Creation of a small business assistance program• Enhance the economy of the city with investments and creation of jobs • Investment in public education • Plan for sustainability of water resources for future generations• Improve quality of roads• Maintain and improve quality of parks and recreations for youth• Invest in police, firefighters and first responders

Mayor Romero mentioned that one the biggest assets the City of Tucson has it’s its geographical location.

“Tucson is located in a very strategical location to enhance our economy in a big way,” she mentioned. “We are only forty minutes from Mexico, which means that we can attract companies that can not only do business in the United States, but also with Mexico and Canada.” She added.

Per Mayor Romero, Mexican tourists spend about a billion dollars yearly in Tucson, but would like to add a bigger economic impact by attracting Mexican companies to relocate to Tucson.

Mayor Romero added that Tucson is an “Immigrant Welcoming City,” “We don’t only want to do business with our neighbors from the South, we also welcome them to our city, to our region to our state.

Running a city is no easy task, with grit and determination Mayor Romero is ready to take on the duties and responsibilities for the next four years.

TITO ORTIZ VS. ALBERTO EL PATRÓN –WHICH SIDE ARE YOU ON?