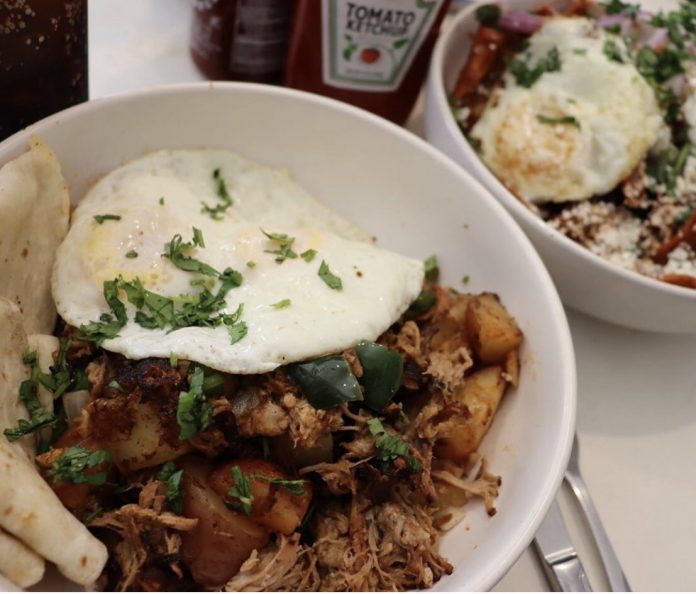 The Bread and Honey House is a breakfast spot located in East Phoenix, owned by Chef Javi along with his wife; and the front of the house ran by his kids. When I walked into this restaurant, the first thing that I saw is Chef Javi‘s smiling face from the kitchen window, which was a very welcoming feeling. I ordered the daily special: Carnitas con Papas with an egg on top + una Tortilla de Harina. Bomb! The menu has variety for everyone, breakfast sandwiches, b-burritos, bacon, eggs, potatoes, and chilaquiles; which is my personal favorite.

I sat down with Chef Javi on a Saturday afternoon as we chatted for a few hours talking about his restaurant, success, and life in general. Chef Javi lives by the motto, “Serve others so that we can be served.” His family owned restaurant has a way to make you feel like you’re eating right at their home. Chef Javi’s roots are from Guerrero, Mexico, working his way up from kitchen prep to opening two successful restaurants here in Phoenix. He says that he even learned a lot from one of the best Chefs in the valley.

We also talked about the struggles of running and starting a new business. His message for the Raza is, “Don’t be afraid or avoid the system to get your business going.”

I love eating at The Bread and Honey House, they’re a must try for breakfast lovers. People drive from all over Phoenix just to eat here. (It’s also light rail accessible!) This was actually my third visit, that’s just how wonderful the food and service is. Their menu is also affordable, with meals under as little as $12. #asimegustacomer.

Visit The Bread and Honey House

Enjoy Delicious Tacos with a Twist at Loco Style Grindz