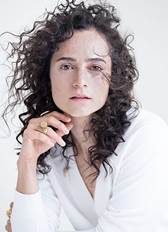 “It was a complete adventure, we finished shooting a year ago, but it took me seven months to get back to my normal weight and to feel healthy again,” Quintanar told ArizonaLaintos.com.

“I had to gain weight, I had to learn how to speak like Yolanda, I studied her interviews online, her biography; what I really wanted was to create a real interpretation of Yolanda and not just a caricature of who she was, I really wanted to construct a true character.”

The highly anticipated mini-series revolves around the investigation and trial of the murder of the beloved Tejano music legend. An adaptation of the bestselling book by three-time EMMY Award winning Telemundo journalist, María Celeste Arrarás.

“El Secreto de Selena” evolves around three main characters: Selena (Maya Zapata), who gives everything to achieve success; Yolanda (Damayanti Quintanar), who has a fixation with her idol; and Maria Celeste (Sofia Lama), the journalist who had exclusive access to those involved in the story and led an extensive investigation surrounding the assassination.

In playing Yolanda, the actress talks about her assessment of Saldivar as a human being, “As an actor you cannot judge the character you are playing, but rather understand the motives.  Yolanda desired to be loved, to be someone important, to be accepted, to be liked and Selena gave her all that and more; but when she felt that she would lose it, she felt lost, Yolanda was not in a stable emotional state, she was taking medications and had been stressed and paranoid leading up the incident,” the actress stated.

The incident that took Selena’s life has been very-well documented over the years, but Quintanar talks about why this is a must-watch mini-series, “The viewers will be kept on the edge of their seats as they will witness a lot of information never been told before, with hard data, all based on exhaustive research.”

In many instances investigative reports, documentaries and mini-series lead to the courts opening up old cases.  Can this mini-series shed new light in Yolanda Saldivar’s case?

“I don’t think this series will lead to opening up the case,” stated Quintanar.  “At the end of the day Yolanda bought a gun, took it to the scene and a bullet from that gun killed Selena,” she added.

One thing that Quintanar can assure she learned for the production is that at one point in their lives Selena and Yolanda were very happy together, “They were best friends, they were always laughing, they were like a couple of children having fun.  I you look at their pictures and old footage you will always see them laughing, until one day everything got ugly,”

For more about El Secreto de Selena, viewers can follow the series on Instagram @ElSecretodeSelenaTV, including @Telemundo and join the conversation using #ESDS.

Kobe Bryant More than a Basketball Legend; a Down to Earth Human Being

The City of Mesa Has Extended It’s Entire Entertaiment Closure...